Technology-centric dystopian futures are a dime a dozen, and who really wants more bleak sci-fi futures portrayed in media right now while we are all living through a pandemic AND murder hornets? I’m also acutely aware of how absurd it is for Amazon to be producing a show about morally dubious tech giants and a future dominated by corporate sponsorships. Let’s just carefully meander around that rabbithole as that’s a topic for another time. 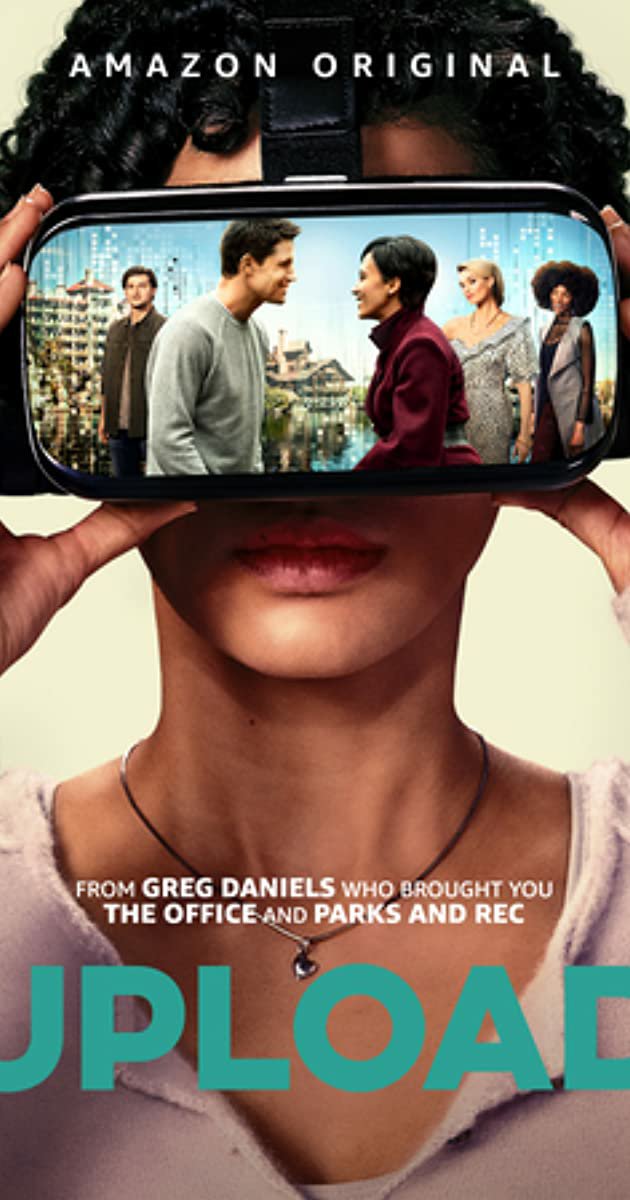 “Upload” is not just another such show. Disclaimer before proceeding: I was already interested thanks to the trailer, but still apprehensive – it was a great blend of comedy, romance, and just enough dramatic tension. My fear? Trailers like this often give away all of the show or movie’s best moments and the rest falls flat. Not the case here.

Nathan Brown, played by Robbie Amell, is forced to choose between being taken to an operating room where he may end up dying or being uploaded to Lakeview, a premium digital afterlife. The caveat is that he would be uploaded to his girlfriend Ingrid Kannerman’s (played by Allegra Edwards) family account. Upon arrival, Nathan is greeted by his customer service representative, Nora Antony (played by Andy Allo) who he initially only knows as his angel. Nathan gradually realizes he can’t remember certain things from when he was alive, and it comes to light that some memories were damaged – something that wouldn’t normally happen in the uploading process.

Season one is ten episodes, with the pacing just right to establish things without dragging the story out or speeding through character development. Greg Daniels expertly plays out plot threads that separate and return to one another, culminating in one of the most frustrating season finale cliffhangers of recent memory.

Fair warning has been given and I take no responsibility for anyone snapping their phone in half over said cliffhanger. Especially those last five or so minutes.

The drama and tension built as Nora and Nathan work together to recover his memories, all while hints are dropped that something far more sinister is at play, is a huge part of why this show is so easy to get lost in. The romance and comedy don’t take a backseat to the drama – it adds and works well with it. Comedic moments break up tension nicely at times, while the romance between Nathan and Nora acts as a great foil to the mystery behind Nathan’s memory gaps. There’s no shortage of fun banter, entertaining visual gags (the Lakeview AI is often involved), and genuine moments.

“Upload” hits at its viewers hard with no shortage of emotional drama only to provide enough laughs to balance it out before another painful suckerpunch to the feels.

The plot of “Upload” season one is excellent, but it’s thanks to the cast that it really comes to life. Upload has an extraordinary, diverse cast. Each character is compelling and complex enough that they could at any point be the focus of the show.

Luke, played by Kevin Bigley, is a fun, at times immature, wingman to Nathan at Lakeview, acting both as a helping hand in adjusting to the digital afterlife while also getting Nathan into his fair share of trouble. Luke’s angel, Aleesha (played by Zainab Johnson) is wise to Luke’s constant shortcuts around the rules and she takes none of his bullshit. Chris Williams as Dave Antony, Nora’s father acts as a great countpoint to the culture of digital afterlifes as he instead wants to die so he can be reunited with his wife in Heaven.

I could go on about each actor, but the simpler way to say it is that every role in this show plays out like a main character in their own rights, and that is a credit to the phenomenal cast and the work they clearly put into making “Upload” what it is.

“Upload” is a well-paced emotional journey through drama, comedy, and romance with brilliantly realized character living out complex, yet still relatable, narratives, and to miss out on it would be to miss out on some of the best television entertainment available right now. (And, again, we need that because have you seen the murder hornets? Because they’re proper nightmare fuel.)