I’m convinced that days off of work are not governed by the same space-time laws that are in play every other day of the week. They go by way too fast when they shouldn’t, and drag out when it’s time to focus on things like cleaning or important paperwork or whatever.

On the plus side, I did take a terrific walk tonight with Brianne. It was relatively cool out, but not unpleasantly so, and it was enough to get my brain going on various topics relating to creative things.

We’ve established by now that when my brain gets going on things that it can go to negative places. However, that negativity is a pretty powerful starting point for me to put my problem solving skills to good use. So I guess it’s a lose-win situation. Something like that.

However, all things are eclipsed by next weekend and Intervention. After that, I’m making my first major road trip to Chicago for some quality time with my best friend Jason. This upcoming vacation, I think, will be a much-needed break, and I’m hoping it will yield a good deal of productivity on my part (on top of seeing movies and enjoying good liquor with friends).

Tonight’s post, however, relates back to some of my thinking from my walk. It should provide some insight into how my brain works, and so I caution readers to potentially step away while retreat is still possible.

As I’ve said before, I’m a child of the internet. I remember fondly the days of dial-up modems and spending far too much time on AOL Instant Messenger, and that statement makes me feel so old I can’t even deal with it. It really baffles me that there are people who are confused by the mention of VHS tapes. That’s not the topic, and now I’m just making myself feel like I should be receiving mail from AARP. Moving along.

Back in 2009, Onezumi (co-founder of Interventioncon, all around good person, and someone made up of equal parts outstanding genius + bonkers-crazy madness) insisted I get a Twitter account. It feels like it was even earlier than that, but my sense of time is questionable on its good days. I did, and I forget what my original Twitter handle was, but I took to it relatively well. For a bit. I’ve bounced off and on Twitter over time for a good deal, but recently (read as back around Oscar time, perhaps, when my writing intensified for Joshua Harkin and the Wicked Nightmare King) I’ve been far more active on it. It’s nice, as I’ve met some absolutely brilliant people who are just terrific fun to interact with (and to think my parents told me to be wary of strangers on the Internet).

However, with a book in the works after winning a book publishing contract through Cary Press (still very excited about that, but a touch anxious as well), I’ve come to a rather unfortunate conclusion: when it comes to networking, social media, and the likes, I have no idea what I’m doing. 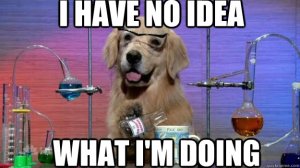 This is an accurate depiction of me in my current state. It’s clear I haven’t shaved in some time.

I’m pretty confident I’ve gotten better with being a people person, though having to type that out makes me really question my social interaction capabilities (only made worse by dwelling on that; oh my god why). I have minimal advertising and PR knowledge from my brief time at Point Park University. I’m pretty sure I have no idea what networking, in a practical sense related to sharing content and generating new views while helping others do the same, is. My brain defaults to “networking is the process of setting up an internet connection somewhere”, even though I just pretty much described what I’m pretty sure it is just a sentence ago. It’s actually one of those things that I can’t help but headbutt a wall over.

Time for some serious real-talk: Phil’s Misadventures in Fiction’s good days generate between 10 and 20 views. My best day ever clocked in at 46 views, which almost gave me a goddamn heart attack. That’s where I freeze up. Getting more people on the site and drawing out more interaction. I love talking to people, and I love hearing what people have to say (especially when it comes to things they’re passionate about). I seem to fall flat when it comes to working out the technical aspects of marketing, networking, and so on. It’s probably why I didn’t keep on keeping on with studying print journalism.

Of course, I have no intention of letting it just be a problem. Especially not with a book that I’ll have to shamelessly shill. For now, however, it’s a real bother to think about, and so I’m going to stop thinking about it for the night so my head doesn’t burst into a cloud of frowny face confetti.

I’m not sure I consider this my Achilles’ heel, but it’s a damn-big hurdle. As writers (and other artists out there, speak up), what’s the biggest part of the creative process outside of creating content that seems to trip you up the most? What solutions have you found for those problems?