Before this continues, I want to point out that this isn’t today’s installment towards One Hundred Days of Blogging 2.0, which should sound a touch insane as that means I’m deliberately making it a point to force myself to write two posts today. Few people have accused me of having particularly good ideas, however, so this makes sense. Moving along.

Actually, I lied. I think I will use this for today’s post and follow with the other, thematically appropriate idea anyway. Not sorry.

Something I can state as purely fact, with neither pride nor disappointment, is that I haven’t really read much of A Song of Ice and Fire. I usually hit a point in Game of Thrones where, despite loving fantasy novels and having read other titanic titles such as the entire Lord of the Rings trilogy (plus The Hobbit, before it became a trilogy), I become so supremely bored that reading another page borders on self-inflicted torture. There are plenty of people I know who absolutely love George R.R. Martin’s behemoth heptalogy, and there’s nothing wrong with that. The point I’m meandering toward here is that the most common complaint I hear from these A Song of Ice and Fire fans is that Martin is writing too slowly. That he’ll probably die before he finishes the series, given his advanced age and larger-than-average stature. Fans of Robert Jordan’s works who also enjoy A Song of Ice and Fire are probably already bracing for the worst. Oh, and then there’s the small matter of the Game of Thrones series on HBO having a strong chance of completing the series before the books can.

These criticisms aren’t exactly isolated, and apparently they aren’t welcomed by George R.R. Martin, especially those regarding his death. 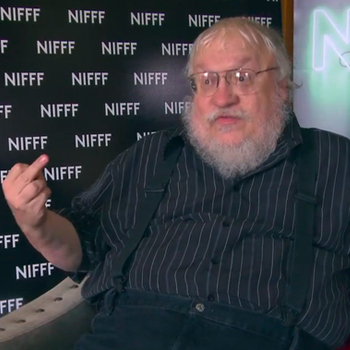 Pictured: George R.R. Martin’s response to suggestions he’ll die before his books are finished. Or one very angry Santa Claus.

It’s easy to see why Martin wouldn’t appreciate such remarks. He writes his books–titles ranging in page-count from 800 to did-you-just-glue-a-bunch-of-old-phone-books-together–on an ancient computer with no internet connectivity to avoid distractions, and it can’t be an easy feat to keep track, and properly maintain the continuity, of the many complex subplots and subnarratives that are responsible for much of why fans eat these books up as if they were brains at a zombies-only buffet line. Award-winning, similarly beloved authors such as Neil Gaiman have even spoken out at the criticisms directed at Martin’s writing speed. At some point the phrase “George R.R. Martin is not my bitch” appeared.

As the title of this post states, I am by no means a famous author. I’m not semi-famous, quasi-famous, or even barely-has-a-cult-following famous. There is undoubtedly a great deal more to consider once a writer has achieved a spotlight on par with the likes of George R.R. Martin or Neil Gaiman. There are speaking events, book-signings, whatever Hellish process goes into turning a work of writing into a cinematic masterpiece (or train wreck, perhaps), and so on and so on. Once a writer reaches a certain point it stops being entirely about writing, with greater focus shifting to maintaining a good public image and finding a perfectly balanced level of fan interactions to keep current fans interested and draw new ones in. I don’t envy writers of such status, even if there are days I wish I could be more like them in terms of my own accomplishments.

I mean, what writer doesn’t set out with the hopes of gaining, at the very least, a measure of fame and fortune? I write because I love to write, but I’d also be more than happy to accept money for my writing. I’m sure the good folks at Navient (one of the polyps that broke off of Sallie Mae and became self-aware) would be thrilled if I became a moderately well-to-do author. That, however, is a diversion to be explored at another time. Another time called “never”. Moving along.

It seems reasonable for an author to get frustrated and let off a little steam, especially if fans are suggesting the author in question is more likely to die than finish the series they’re working on. You can’t rush genius, even if it’s certainly easy enough to affix a price tag to it. Similarly, on top of criticisms and demands, fans who also happen to be aspiring writers often ask their favorite, published authors for advice. The responses aren’t always particularly warm and fuzzy, but that too can be argued down to how impractical it would be for such famous people to give a one-on-one reply to every single writer who thought they could be the next big thing.

This is the point where things get tricky.

As I just said, authors really don’t owe their fans, their readers, or really anyone anything at all (perhaps, at times, they do owe an explanation to their publishers as to what they’re really doing when were slated for a book release about a year ago, but now I’m just being glib). If an author wants to take twenty years or more to finish a sequel, then god damn it they have every right to do so. Fans can beg and demand and groan all they want. They can also throw their hands up in the air, say “fuck it,” and move on to other reading material. Less fans equals less book sales. While a big name alone is enough to guarantee books getting published forever it doesn’t also mean those books will sell.

In this age of social media and split-second communication, there’s so much importance placed on keeping up a strong rapport with fans of one’s work. Sure, there might be a trillion messages asking how to write better or what needs to be done to become a published author. Chances are that those messages were written by people who are hoping their idols–the writers whose books make up good portions of personal libraries–can provide some insight. Yes, there are plenty of search engines that can yield how-to pages. It’s not the same. I’m not suggesting that every such message be given a personal response; that every fan be placated individually. I’m just saying it would probably be a lot easier, and a lot less snotty, to link to an answer on a Frequently Asked Questions page than it would be to type out some elaborate, snarky reply. That only serves to embarrass a person publicly while also doing nothing to help. For the record, though it matters to no one: Gaiman’s recent-ish response of the aforementioned nature to someone made me think “You know, your next books better be exceptional to the point of printing money”.

Again, I have to acknowledge that a lot of these authors are very busy people who don’t have time to react to each gesture–each comment, each tweet, each whatever–a fan sends their ways. I’ve also never heard of anyone losing an entire day’s worth of productivity by taking a second to favorite a tweet or like a Facebook comment. That’s something I absolutely love about C. Robert Cargill. I tweeted at him, and not only did he respond (I can’t find the screencapture, and yes there is a screencapture somewhere because I was LOSING MY MIND) but he also replied to my comment about being sorry for fanboying by saying he’s been in a similar position, being a fan of many different things, etc. I realize this is a huge exception for some, but it takes a person who seems like this unattainable, unreachable icon of something people love and humanizes them. Fair counter-point: some famous authors might actually be robots.

The real take-home point I’m going for here is a simple one. Authors don’t necessarily owe fans anything, but perhaps some of those authors could benefit from a realization that the best way to hold on to fans who have been with them from obscurity to fame may not be by acting like a puckered, stinking asshole. Just a thought.

Or maybe it is just best to leave those we idolize on distant pedestals, appreciating their art but staying away from them.