People who know me are familiar with my fondness of whiskies, with my more recent obsession being single malt scotch. People have accused me of being somewhat knowledgeable on the topic of liquor. I’ve been asked for advise–no, guidance even–on what to purchase when it comes to different boozes. Quite a few people have had me wave a glass of something in their general direction accompanied by a demand they try it.

This idea has been, dare I say, brewing for a while now, and I’ve decided I might as well just let it happen.

Here’s the thing about scotch (and liquor in general). I enjoy it, but I can’t say I typically find myself using the same descriptors the boxes and bottles provide. It’s easy enough to say I lack the sophisticated palate and training needed to fully appreciate a truly great drink, and I’ll respond by laughing the smug, awful laughter of someone who has made a Blood & Sand with The Glenlivet 21 Years of Age (because it’s my bottle and I’ll enjoy it however I please, thank you very much).

My solution to the loftiness and aloof descriptions favored by these mighty fine spirits (not to say they aren’t deserving of such praise and descriptions) is to put my own spin on the experience that each of my selections has to offer. This is Idiot-Proof, in which I dumb things down to my level in hopes of helping sway any of you who may be on the fence about trying something new. Tonight’s post–the inaugural post–starts off with a real doozy, too, which only seems appropriate. 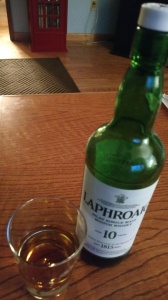 Laphroaig. It has a goofy, hard-to-pronounce name (lah-froyg for those of you who don’t feel like taking a Google break). It’s also one of the most polarizing single malt scotch whiskies out there. It’s an Islay (pronounced eye-lah) scotch.

The Laphroaig distillery made a damn good advertising campaign out of how people either love their scotch or come up with inventive ways to snark about it, and I am not ashamed to say that advertising is what caught my attention enough for me to open my wallet and add a bottle of the Laphroaig 10 years of age to my collection.

A cardboard tube capped with metal discs seems appropriate. It’s very bare-bones, lacking in flashiness. The history of Laphroaig, as well as an invitation to become a friend of Laphroaig, are present. The bottle is a lovely emerald glass that invites owners to make a goddamn mess trying to turn it into something neat and practical, like a lamp or something to collect dust while trying to think up what to make it into.

Laphroaig packs a real punch in all ways, and its introduction by way of its rather pungent aroma is telling of the experience ahead. On clear-sinus days, there are definite overtones of brine. It smells like sitting by the ocean on a stormy night and not giving a damn about anything (smug smug smug). It has medicinal qualities, though I say that in the sense that it has odors that come off like a sterile environment. It’s great for if you’re trying to convince your friends you’re drinking industrial-strength cleaning solution or have some serious sinus issues in need of clearing up.

There’s no mincing words here: people don’t tend to like Laphroaig. It’s a matter of loving it or hating it, with very little room between the extremes. It has a denser feeling to it, and there is definitely some reward to not just downing it like some cheap swill (as is often the case). The initial taste is potent and pungent, reminiscent of old cough syrup stripped of the fake cherry flavoring. From there it gives way to what tastes like taking a tumble under a wave you underestimated. There’s a powerful smokiness that can come across like swallowing a bonfire, complete with a lingering warmth it provides. It finishes with a pleasant almost-sweetness. To some, it acts as an invitation to go back for another sip. For others, it sends signals to the brain that respond by saying “Christ, just dump this and get some water or whatever.” This description feels like a gross injustice, however, as Laphroaig is complex and enjoyable, if not a bit intimidating.

Laphroaig is a solid introduction to Islay single malts, and one of my favorite scotch whiskies I have had thus far. It’s a more affordable choice, standing around $50 for the 10 years aged offering. It boasts some really terrific variety with its Quarter Cask and Triple Wood varieties, and it makes for some damn good smoky Manhattans (because it’s your booze and you can do whatever the hell you want with it). If the idea of feeling like a fire-eating, seafaring dragon is appealing to you, Laphroaig is worth a try. Even if smoky, medicinal, and briny sound scary, it’s still worth a try. It’s everything a good single malt scotch should be: an experience in well-layered tastes and aromas that’ll make even the most seasoned drinkers crinkle their noses and warm their bellies. Give it a try, and thank me for the recommendation later.