Between yesterday and today, I drove eight-ish hours, and traveled here from one hour into the future. Needless to say, I’m still pretty well exhausted. I did consider going for an easy, lazy post again, but I know my brain well enough to know some of the details will start disappearing before long. The steel trap of my memory. Yeesh.

That being said, where to even start? What to even say? This post is going to wander into some very sentimental territory, so I feel like I’ll have to balance that out by posting nothing by snide remarks and biting comments tomorrow.

I’m not even sorry to say this, but home is most certainly where the heart is. By that reasoning, I’m at home in the Pittsburgh area, Hollidaysburg, and Chicagoland. This trip only acted as a strong reminder that home isn’t necessarily just one location, and it’s certainly a good feeling to know I’ve got a couple places I can go to feel like I’m where I belong.

Let’s not discount how I drove further than I’ve ever gone before, and that really made my trip an adventure. I’ve talked about the drive there, so I’m just going to take a quick moment to repeat how I’m glad I didn’t die or get lost towards the end. END_OF_DOCUMENT_TOKEN_TO_BE_REPLACED

I have a lovely post in mind to commemorate my Chicagoland misadventures, but that drive. My god. Instead, for now, here’s a picture of my Chicago and Pittsburgh mugs, showing off two places I always feel at home. 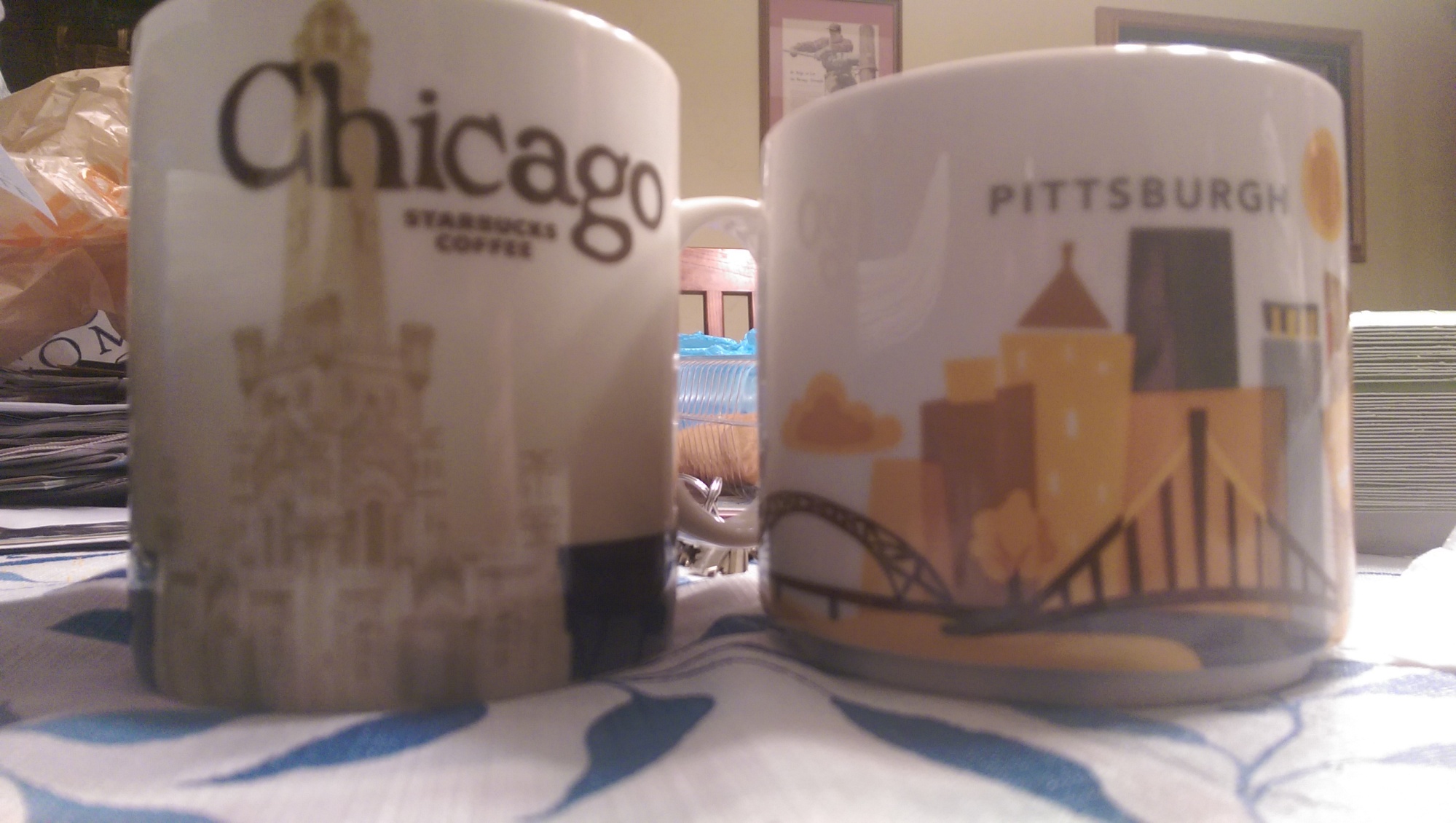 There seems to be a storm a-brewin’ in them thar hills just outside. Or something that one day aspires to be a storm. It rained for a solid thirty seconds or so, just a proper and sudden downpour, and then nothing. I hear the occasional rumble of thunder here and there, but I’m not sure it’s not one of the neighbors making a bit of noise. 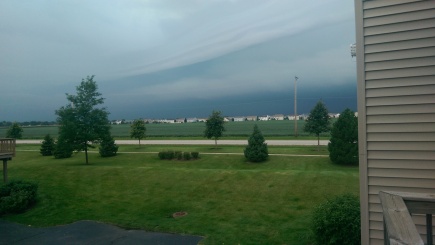 All of this, of course, is being posted from the Chicagoland area (specifically Plainfield). That means I survived my first-ever long road trip! I am a weird blend of highly enthusiastic and road-lagged, the latter being slightly exacerbated by woes of a non-vacation variety creeping in from one time zone away. Thankfully for everyone, those woes are not what this post will be about. Instead, let’s talk about my adventure, and it certainly was an adventure, from Carnegie to Plainfield. And how the end of the trip involved Mother Nature making an attempt on my life.  END_OF_DOCUMENT_TOKEN_TO_BE_REPLACED

Today’s been a damn good day for me. That statement overlooks how I spent work in a haze, half-asleep, for reasons unknown. Naturally such comments require explanation, and I’m happy to provide it. If only I could type without it coming out like I’m rolling my face along the keyboard.

I promised some playlists, and I’ll be following through on that for tonight’s post. Why? Because I haven’t packed a single article of anything yet, which is probably not ideal since I leave tomorrow. I also only made one playlist/CD so far, so I’m a pretty tremendous failure in that regard, too. However, I did send off my signed contract with Cary Press and I am tremendously excited to really dig into work on my first published novel. Expect lots of fun from here on out, folks. END_OF_DOCUMENT_TOKEN_TO_BE_REPLACED

Four days until I’m officially on vacation. It’s so close I can practically feel the waves of awesomeness generated by the crowds at Intervention washing over me. Naturally, I have to do some road to Intervention and Chicago posts because I am really damn excited about next week. The promise of great times with terrific people is just overwhelming.

I’ve got a couple pretty rough ideas where I’d like to go with these posts (tomorrow’s post is my 200th post, by the way; how time does fly). As always, there’s some element of doing things as I feel like it and hoping they turn out okay.

Not only am I traveling to Rockville, Maryland, with my good friend (and brother-type person) Jason, but I’ll also be making the trip to Chicago to see his new, very first bought-for-himself-like-a-responsible-adult house. And what kind of writer would I be if I didn’t appreciate the journey as much as the planned destinations? These trips need to be absolutely amazing. Especially the one to Chicago, as that will be the furthest I’ve ever driven. Ever.

I am tremendously fond of all varieties of music, though I still have aversion to rap and country. I hate to admit it, but the CD in my car has gotten quite stale. I can’t possibly drive from Carnegie (the starting point after this upcoming weekend) to Chicago without at least some new tunes to drive by. It’s also the easiest part of preparing for my trip. Clothes and stuff can wait, but picking music so I have CDs ready in time? That’s important stuff.

What kind of music makes for a good road trip, though? When Jason travels, I know he likes to listen to audio books. I’ve tried that, but it just doesn’t feel right. Also, I’m far too easily distracted. Traveling to a new place while trying to focus on a story is probably a recipe for disaster (and also worthy of note is that audiobooks are really goddamn expensive, but that’s spoken like someone who has no concept of money or money-management). Generally speaking, I prefer energetic music. However, to keep some level of balance, I also enjoy some more peaceful music. To avoid falling asleep, the tracks are arranged in a way that makes for jarring transitions.

But what music should these vacations have? Two years ago, Jason and my Intervention soundtrack included Gangnam Style, so nothing is really off-limits. I mean, almost nothing. I’ve been really considering getting (getting, picking up, etc, are all ways of saying buying on iTunes, by the way) some stuff by St. Vincent. So You Think You Can Dance has all sorts of wonderful music, but I’m afraid I’d start trying to do some sort of flailing version of the dances associated with those songs on the show. I’m only half-joking there.

Suggest music, people! I have until Thursday night to burn CDs. As part of my travel journal, I’ll post the playlists that ended up keeping me company along the way.

I’m at that point in the summer where I can’t live in the present. Just isn’t happening. My vacation is over a month away, and my focus is fixed on it without possibility of being shifted elsewhere. It’s a real pain in the ass when it comes to being creative, but I’m still finding plenty of energy there. And for work. And for Tweeting. I sure as hell don’t get enough sleep, but I figure that’s an acceptable sacrifice.

My car passed its inspection, and I am tremendously excited and anxious about my impending trip to Chicago. And so this will be one of the (probably many) non-writing posts. END_OF_DOCUMENT_TOKEN_TO_BE_REPLACED

It’s been a mostly-exciting, somewhat headache-inducing week. Let’s just leap into the actual post. I’m entirely too tired for this early, which is embarrassing, but I want to finish this post before I fall asleep on my Surface 2.

Do tweets count here? They still don’t, do they? Damn. Ignoring that, there’s “The Maskmaker’s Apprentice”, “Another Starstruck Misfit”, the cannibal story I still haven’t officially named…something else. My brain’s gone a bit soft. I need to get back into setting goals for myself in terms of weekly writing, which sounds mildly suicidal since I’m working on my One Hundred Days of Blogging posts as well. “The Maskmaker’s Apprentice” doesn’t count towards the goal of twenty stories posted, by the way, because I’m apparently challenging myself to write and rewarding myself by making it as punishing as possible. On the plus side, I’ve received so many new commenting readers. Mostly spammers writing comments in Russian, but I’m not too picky when it comes to comments.

I’ve got no particular plans for writing in this coming week, but I might just be lying there. We’ll see.

So many books, so little time. I’m rereading Let’s Pretend This Never Happened (A Mostly True Memoir), and I picked up The Long Mars. You may be saying “Phil, you buy a lot of books and you should probably read them instead of buying even more books,” to which I say I will never stop buying books. I should, however, get working on reading them. I think a great starting point would be to start over on The Long Earth, move on to The Long War, and then get to The Long Mars. I’m impatiently waiting for Bryan Lee O’Malley’s new graphic novel, Seconds, which sounds like it’ll be a terrific fun read.

Car inspection happens this week, which is important for my planned Chicago adventure at the end of August. I’m anxious that something will go horribly wrong, but when am I not? Don’t answer that, anyone. It’ll be the longest road-trip I’ve ever taken, and I’m going solo so it’ll be something else. We’ll see, once all is said and done, what something else turns out to be (good or bad). I’m considering a travel journal to post on here, as there’s still enough time for me to actually plan it out. Or put off planning it and just haphazardly meandering through it like I do with many other things.

The plans for this week include writing, reading, and a little recovering from last week. I’m more excited, I’ll admit, for the week after this one, as I work three days (thanks to a couple leftover paid holidays). Making a trip home to see my family, and I’ll have plenty of time to work on getting some additional writing done. None of which will be spoiled here, of course.

Here’s to a pleasant, hopefully peaceful week for everyone, and remember to keep the Kaiju population under control by getting your Kaiju spayed or neutered.

PS: I’m sorry, but I refuse to see this post linger just beneath five hundred words. Nope. Had to fix that.