Or “It’s been a pretty sparse week in terms of creativity, but I’m excusing that because other good things happened and I’m good at making excuses.”

Here we are again, on a stormy Sunday afternoon, and I find myself thinking back on what writing I did (and didn’t) get done this week. There’s a couple ideas rattling around in my brain, demanding their time on the pages, so I suspect I’ll have to find time to get to those before they start shouting things like “neglect”. Anyway, let’s move onto the better parts of this post before I get distracted by shiny objects again.

I participated in the 20th Central Blair County Relay For Life, alongside the Sylvan Learning Center Team. We managed to stick around until a bit after 5a.m. I don’t know how much our team raised, nor do I know how much this year’s Relay raised overall, but it was a good time for all involved. I have a number of cancer survivors in my family, and I know a good few people who lost their battles with cancer as well, and so this is a cause very near and dear to me. There are tons of Relay for Life events, so I’d definitely encourage participation.

Also, in light of how minimal the rest of this post will be, here’s a picture of me with what my girlfriend has taken to calling her plumbrella. Enjoy the nightmares that follow. 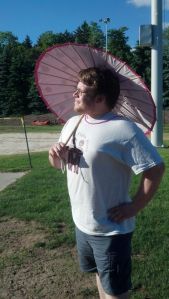 I’ve hit a point where my brain says “Well, I know we did some writing, but I can’t quite sort out what,” so that’s not super ideal. I’ve Tweeted a fair bit, but that doesn’t really constitute writing. Not in the sense of writing I’d wanted to get done, anyway. I did, however, finish up editing and adding to a piece I wrote on streamed video binging (which, despite my best efforts, I couldn’t think of a title for). I also voiced interest in writing for Magnific.com, a site created by the folks at Screen Robot that works by sending out an article subject at the start of the day and requiring a finished draft within a certain number of hours. Given that I don’t live in the UK, I’ve talked out the time difference with the folks there and should hopefully be getting started some time this week, I believe. Once I see The Fault in Our Stars, I’ll be able to write my comparison between the movie and the book, commenting on how titles like this are becoming a sort of modern-day tragedy for the younger generation (or something like that; this is a rare bit of insight into the writing process as thoughts drift around my brain, occasionally sounding good before they end up on paper).

This is a big one this week, actually. After much discussion, and minimal planning, I will actually be able to make it to this year’s Interventioncon, which is certainly happy news for me. I’ll document the weekend with pictures, writings, and a couple overpriced drinks at the hotel bar (because what better way to document such an occasion as Interventioncon’s fifth year than by chemically etching it into my liver?), and I’ll be sure to post some sort of write-up on here when all is said and done. I whole-heartedly encourage people to check out the site (if nothing else) as it’s a truly amazing event. It’s a place for creativity to flourish, and it’s a safe place for all (there is a zero-tolerance policy on any harassment that is taken very seriously, and that’s something other events could really look towards adapting themselves…*ahem*). Before I move on, I cannot emphasize enough just how great this event is for aspiring artists of any sort. The founders are genuinely wonderful people, the staff all love and care about their jobs and the event, and the con-goers are all a tremendously supportive bunch. Did I mention the pre-registration cost is still available?

Speaking of pictures, and I say this next part with mixed parts shame and additional shame, I can now say I’ve caved and gotten an Instagram. The appropriate response to that statement is, in fact, a mix of sighs and disgusted looks, so gold stars to anyone whose reaction met those criteria in any way. I don’t even remember why I caved, but I think it was something about wanting more apps on my Surface 2. What an awful reason. Causes aside, my Misadventures in Pictures can be found at my Instagram of the same name – MisadventuresInPictures. It links back to here, too, so if you’re really bored you could occupy your time by looping between this site and my Instagram. I wouldn’t recommend it.

My Nook app suggested checking out Proof The Science of Booze, and so I downloaded the sample. For any nonfiction/essay fans out there, this book looks to be a great buy. I’ve only read a little of the sample, and I stopped for fear it’d become a whim purchase. I’d be lying to myself if I didn’t accept that I think the process of making a good cocktail (I mean a good one, which excludes things like Long Island Iced Tea (sorry, a little booze snobbery there)) was fascinating. I’ve also started reading This Star Won’t Go Out: The Life and Words of Esther Grace Earl, in light of just having read The Fault in Our Stars. I hesitate to admit that, however, as reading this book almost feels like a sort of invasion of privacy, as though some of the material used shouldn’t be available to purchase. I’ve not finished it yet (I’m actually reading it in small segments as it’s quite emotionally draining; not stating that as a bad thing, of course), but it has me dwelling on things like how painful it is to lose someone to cancer or how there’s something inherently wrong in how people end up dying so young. It does sound rather…er, wossname. Juvenile? Uneducated? Naive? I don’t know. I can’t cope with the way certain circumstances rob some people of opportunities while other, far shittier people live long enough to do horrible things like the shootings (which have been so prominent in the news). Sorry. That got a little dark there, I suppose. To end this section on a more positive note, I’d like to direct attention to the This Star Won’t Go Out non-profit foundation. Their mission statement, which can be read here, does a far better job than I ever could at providing insight into what this great foundation is all about.

Let’s wrap this up already

So that about does it for last week. There was plenty of work-stuff, plenty of fun social media nonsense (feel free to join the tomfoolery by following me at @DreadPenguin. I’m already losing my mind to excitement about going to Interventioncon 2014, especially since it’s the five-year celebration, so prepare for me to be completely intolerable before long. Wherever you are, whatever your misadventures of choice involve, I wish everyone a pleasant week.

2 thoughts on “This week in Misadventures”